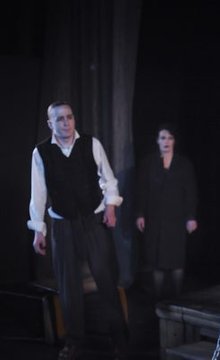 WHO IS THE MONSTER?

At Playhouse in Drottninggatan you get to experience a more or less classic performance around the character Frankenstein produced by Teater Barbara.

The story about the doctor and his monster is known all around different art styles. But who is the real monster?

In Daniel di Grados performance the audience gets some moral treatment and education. The monster is the one who wins favour from the audience. He’s beaten up by people

and chased away and we feel sorry for him.

Back to the beginning of the performance. Victor Frankenstein, played by Tomas Åhnstrand, decides to bring dead bodies back to live, after his mother passed away due of a disease. Victor’s ignorance of not accepting death gets him into trouble.

First the story takes place in Switzerland and then in Ingolstadt in Germany, where he finally manages to bring a creature assembled from many corpses, back to life. But the creature frightens him and Victor escapes.

The story, which is based on Mary Shelley’s novel and rewritten by Johan Ehn, is of a simple dramaturgy. Events happen clearly causally, and dramaturgical plot-turns are predictable. The language is astonishingly easy to understand, so even non-native Swedish speakers who are learning the language, will understand.

The story is driven forward by short intermezzi, while the actors tell the audience what has

happened, but hasn’t been showed on stage. This way the story manages to take big steps

through time and space. Despite these narrative abstractions, scenography and costumes

imitate a certain style. The costumes are held in dark colours and heavy fabric; we could

compare it to some light-gothic style. On stage we find a movable podium, which is pushed

and pulled by the actors according to the scene. On this podium Victor does his studies and

finally manages to bring the creature to life.

Sometimes the steps between time and space happen too fast, as for example when the actors

stay on site on this podium, and it changes to be another place. Two, almost transparent, white curtains which are hanging from the ceiling, are used for projections. But sometimes the curtains are

moved from the right side to the left side of the stage, it is not clear why - or if it is necessary.

The projections are used excessively and the pictures change often. They even appear to be a

little kitschy as they impose on an atmosphere.

Overall the performance is filled up with theatre-tricks: shadow play, movable scenography,

props (not real water for example) and last but not least the sound effects. They are used in an even

more exaggerated way then the projections and this is why the performance gets a cheap touch.

But at the same time there is a big contrast to the actors, as they play pretty well. Especially

the monster; even though  it is a stereotypical adaption of a nice monster, it is performed strongly by Johan Ehn.

The playwright and the actor of the monster happen to be the same person. Maybe this is why Ehn

manages to show the audience the nice side of the monster and to transport moral thoughts.

As the monster is seen on the street, people are frightened, even though he’s helpful they beat

him up, although he’s not attacking. Only a blind man is able of liking him, as he can’t

have any prejudice because of the monster's look. The blind man teaches him language,

reading and playing the violin, but as his kids return home and they see the monster, they

attack it. We learn, that we shouldn’t only judge through someones look, but see behind the

facades. The monster kills the attacker, but only because it was made to.

So back to the question: who is the monster?

It is clear that it’s not the monster, but the mortal human being, always judging and defending it’s beloved without being attacked. And secondly we see, that only the monster is able to feel true love, as he’s craving for a monster-girl. Victor, who would have had the ability of creating one, starts to

help the monster but is not finishing his work. Maybe as revenge, because the monster had killed Victors little brother. And as Victor treated his love Elisabeth with carelessness

during the whole story and finally decides to marry her, the monster pays him back, by killing

her. If he can’t have love, no one else shall have.